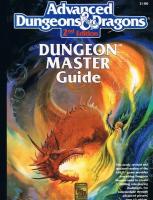 An updated version of D&D was released between 1977 and 1979 as Advanced Dungeons & Dragons (AD&D). The game rules were reorganized and re-codified across three hardcover rulebooks, compiled by Gary Gygax, incorporating the original D&D rules and many additions and revisions from supplements and magazine articles. The three core rulebooks were the Monster Manual (1977), the Player's Handbook (1978), and the Dungeon Master's Guide (1979). Major additions included classes from supplements like assassin, druid, monk, paladin, and thief, while bard, illusionist, and ranger, which had previously only appeared in magazine articles, were added to the core rulebooks. An alignment system with nine alignments was used, rather than the previous three-alignment system in the original D&D rules.