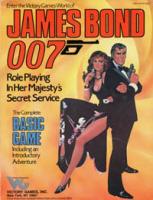 James Bond 007 RPG is set in the world of the James Bond books and movies. The characters take the role of secret agents, either James Bond himself or his allies, other agents of MI6, the British Secret Intelligence Service, or allied agencies (usually the American CIA), and thwart plots of world domination from foreign dictators, megalomaniacal mad scientists, and arch-criminals.

Unlike many role-playing games, where the player characters are, or at least start, relatively unimportant to the universe, and much less powerful than the non-player characters, the James Bond setting is much more centered on the player characters. The PCs are usually more competent than the NPCs, better outfitted with gadgets (from Q branch), have more Hero Points (see System, below) to perform cinematic feats, and in general have a lot of influence on their surroundings.