The Intrepid Seven: A Space Colony Diary of a Septad 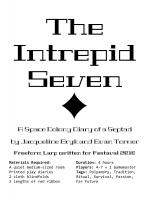 Seven survivors of a crashed space colony ship scavenge the wreckage to build their new society. Fortunately, they have the help of their new spouses: each other.

The Intrepid Seven is a queer science-fiction game about the first seven days of the creation of new life and civilization by a group of seven survivors. The twist? These seven recently unfrozen colonists have just been placed into a hasty arranged marriage with each other, as is their culture’s custom.

The game explores themes of survival, the awkwardness of new relationships and the excitement that polyamorous newlyweds might feel toward each other as they change the world around them. Players take on the roles of characters socialized in a ritual-based future society very different than our own, and then proceed to play through seven short acts that let them explore their mutual passions for creation and each other.