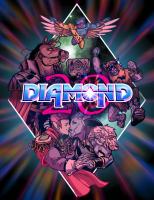 For centuries, 20 guardians have protected Vivia with their wisdom and godlike powers. Now, one has transformed into a tyrant, and must be resisted by the others.

Diamond 20 is a storytelling card game in which players don the roles of various powerful guardian characters gathering in an anxious alliance against one of their own, who has in the meantime taken over everything. 20 character cards are arranged in a diamond shape, with the tyrant on the bottom, the first one to rebel at the top, and the rest of the characters arrayed in order of those most affiliated with the tyrant or rebel respectively. The object of the game is ostensibly for the rebel to beat the tyrant, but that’s already going to happen. Players want to find out: How does the story unfold? What does the struggle mean, in the end? They take turns framing scenes with key characters in dramatic situations and, with the help of game mechanics, resolving them. This rules-light game has a Saturday morning cartoon feel, but for adult players. It celebrates imagination and the power of friendship, and revolves around the dynamics of a queer polyamorous collective.

You are flexible, can role-play intensively as one character in one scene, take a break the next scene, then role-play another character the next. You enjoy battles that prioritize character and emotion over strategy. You enjoy action-figure-style fantasy and romance. You can bring weird characters to life and spin vivid dreams for others.

You facilitate the stories that the players create through their characters, rather than pre-writing the plotline. You frame character conflicts on both epic and petty levels, connecting the political and the powerful with the personal and intimate. You perform as a villain who ultimately did a lot of wrong for some very good reasons. The game text will be all in English.

Amount of Reading: 10 pages (Most of it reference material)

The illustrations of the 20 extremely different characters and the world
map create a universe begging for you to explore it and make up stories.
It is colorful, over the top and feels like picking up action figures and have
them beat up and date each other.