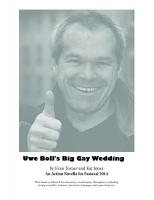 4 a.m. -- Your phone buzzes shortly before your alarm. It's your agent. She says she has a job for you, and it pays in euros.
9:30 a.m. -- You step out of the rental car onto a film set in rural Vancouver. Some extras are wearing shoddily-crafted orc outfits, others are in vampire cloaks carrying big-ass swords. You have no idea what's going on.
10 a.m. -- After picking your way through the chaos, you stumble upon a bald German man with a grim expression yelling at two men: "You must ENJOY ze kiss!" You figure out that this guy must be the director. He then turns to you "Ah, Brigitte Nielsen, you've come just in time."

"Uwe Boll's Big Gay Wedding" is an American freeform larp intended to simulate the delicious chaos of a hypothetical wedding movie directed by controversial German director Dr. Uwe Boll (now is the time to Google him, if you haven't already). Players take the role of miscast actors starring in a genre mash-up gone awry. The game is intended as a tongue-in-cheek homage to Boll's work: off-color video game adaptations and tasteless shooter flicks that shock, enthrall, bore and occasionally move DVD audiences worldwide. Boll's work also happens to be all about offensive content: gross zombies, Nazis, ableism, kinky sex jokes, etc. Any group seeking to play this game should discuss its boundaries at the beginning of the game, or at least establish that raunchiness will ensue.