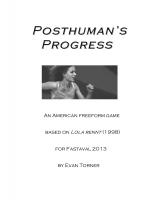 She appears, at first, to be an ordinary woman. A bit weird, some may say, but ordinary. It is at the moment when her lover is threatened by certain harm that she suddenly transforms into the posthuman, a force of nature who will stop at nothing — absolutely nothing — to save him. But reality itself is still composed of many moving parts…

“The Posthuman’s Progress” is a short freeform game based on Run Lola Run (Lola rennt, 1998), a film in which the protagonist resets time itself twice in order to set circumstances right to save her boyfriend. In the game, the players collaboratively establish the crisis scenario between a woman and a lover and then play to find out what happens. The first time, the posthuman cannot avert the crisis; the second time, disaster still strikes. But the third time, reality bends to the posthuman’s will, and players will be delighted to see what extreme solution is actually required to get through it all.