The Lady in the Tower 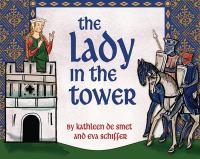 In the time of King Arthur, there lived two knights and a lady who were the dearest of friends. As children, the three swore themselves blood siblings and promised to always come to each other’s aid. Now as adults, the vow has been invoked but their their tangled allegiances and secrets threaten to keep them apart.

This is a romance larp for three players (two who play male characters and one who plays a female character) and one GM. The game will take about two hours, including introduction and debrief. The players should, for in-story reasons, always be at least a lance’s length apart, so this game has social distancing built in.