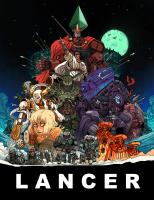 Lancer imagines a future where a survivor humanity has spread to the stars after weathering terrible ecological collapse on Earth - the end of the Anthropocene as a consequence of unrestrained consumption and poor stewardship. Five thousand years later, humanity lives in the wake of a desperate revolution, one where the victorious radicals now manage the galaxy they've won.